Although there aren't too many elements to this particular bicycle, it's the delicacy of the carving that made it trickier than I'd anticipated.I hadn't carved anything that was as fragile all over as this before. There is always a brief period as I begin a carving where, because working to individual commissions I usually haven't carved the subject before, I have to figure out how to deconstruct the block down to the subject matter in a way that safeguards all the details and fragile elements I've planned without getting too lost or making fatal mistakes.
It dawned on me very soon after starting this carving that it was going to get very fragile very quickly and would be impossible to sand smooth unless I approached it systematically. The answer was to carve it from the top down so the bottom of the block was nice and thick and supported the delicate carving as it unfolded. The carving would have to be sanded smooth with details already finished before much of the lower parts had got going.
This isn't how I'd usually finish a piece as sometimes I'd make a breakthrough with a detail or with a particular element on a carving which would take the carving to a level I hadn't thought I could achieve. Now the whole carving would need to come up to that level in order to not let the breakthrough show up the rest as being not so well developed. I try to make sure that all of the carving works at the same level. A consistent level of finish throughout a piece helps it to stand in it's own space, hold a consistent reality within itself and work as a sculpture.
I couldn't do that with this piece as by the time the carving has finally revealed itself, it was too delicate to change anything. 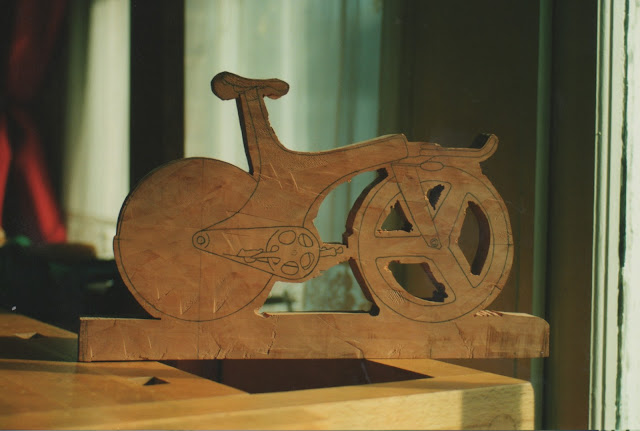 Here is the beginning. The block of Pear wood with the technical drawing on the side and the basic outline cut. Pear is lovely wood to carve, much like Lime in that it can hold fine details and has an even grain and isn't too prone to fracturing or crumbling. It is also quite creamy; that's the best way I can think to describe it. It's harder than Lime but there is a very satisfying feel to cutting through it, it behaves well and looks beautiful when it's just been cut. 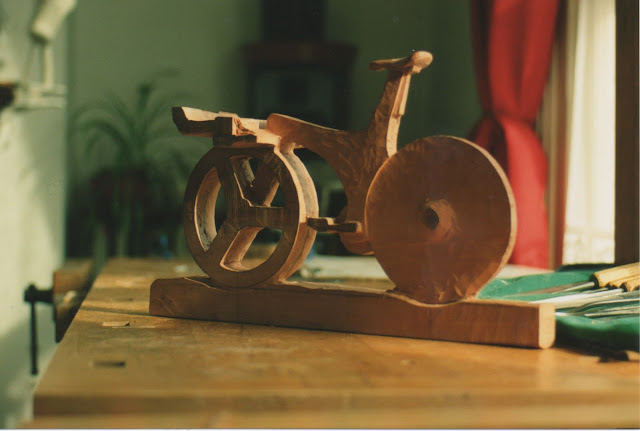 The saddle had to be finished first, with the detailing underneath complete before the stalk could be thinned down. So far the profile has been refined and the rear wheel has been somewhat thinned but not too much yet, as force has still to be applied higher up and it would break low down on the wheel if it was too thin. 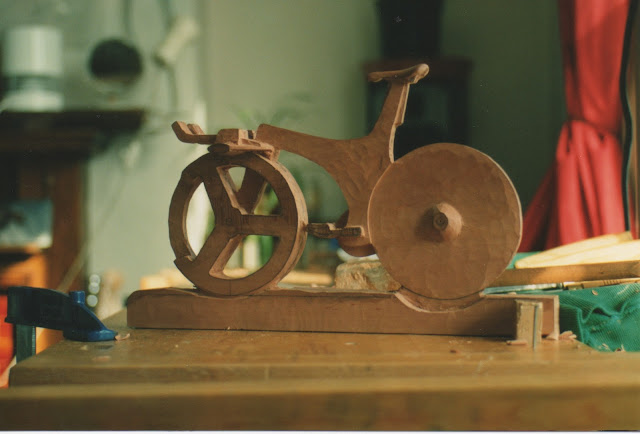 Here, the saddle has nearly been finished and the handlebars have been approximately picked out. The rear wheel is also much slimmer as less force will be acting through it from work above. Also beginning to thin the front wheel. 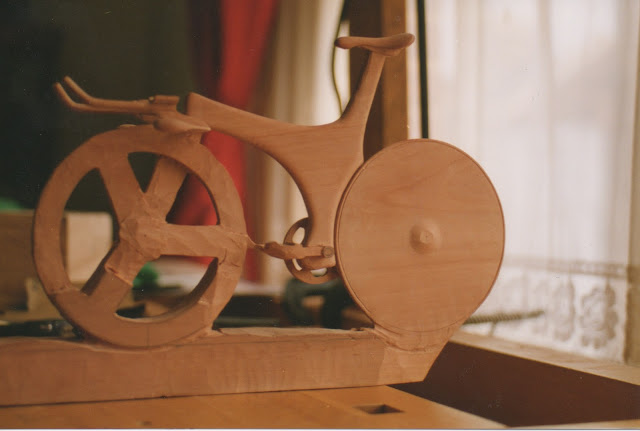 Now the saddle has been pretty much finished so the saddle stalk can be thinned out and the body/chassis of the bike can be refined and sanded. The back wheel can proceed further as less force will act through it and the front wheel retains enough thickness to hold the carving together. Starting to come together and the beginnings of how it will look are starting to appear. 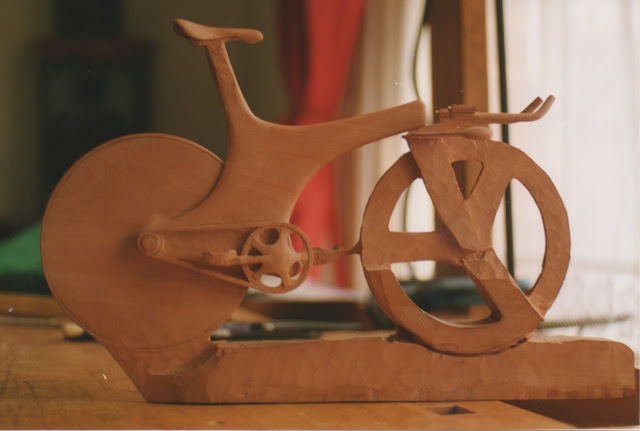 You may notice the little tongue of wood connecting the pedal to the back of the front wheel. This is to protect the pedal from breaking off while it's being worked on. You'll notice more of these on other carving-in-progress photographs on this blog. These little tongues don't come off until the last possible moment when you have pretty much finished the carving and have only to finish carving the edge of the pedal before final sanding and oiling. 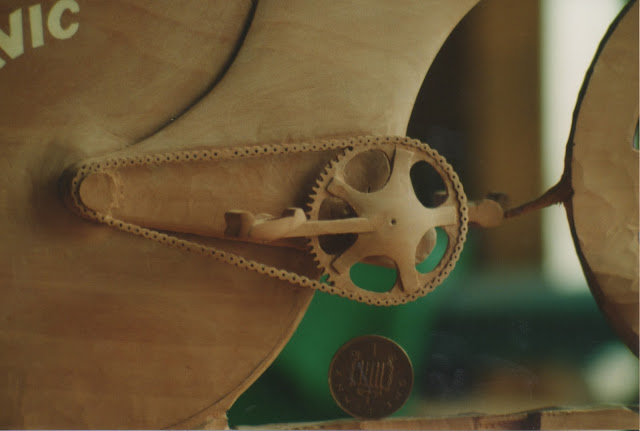 Here you can see, top left, the edge of the veneered lettering which also had to be applied before finishing. You can see how unfinished the front wheel still is in this picture.
And so, to the finished carving....The Lotus Sport Type 108 ridden by Chris Boardman to win the individual pursuit Gold Medal at the 1992 Barcelona Olympics. 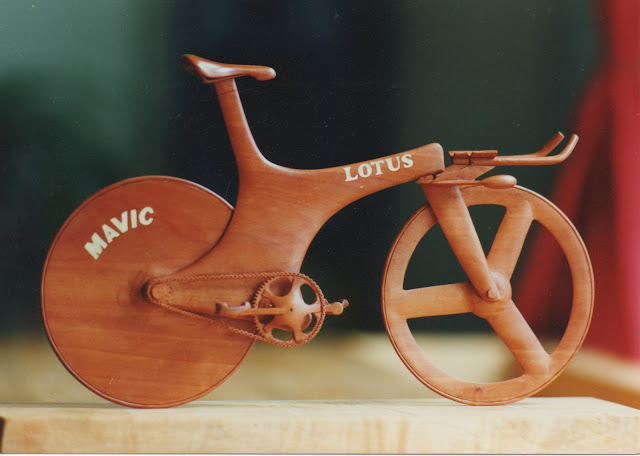 Finished with Danish oil and inlaid with Maple veneer. Mounted on a Sycamore base. 31cm in length. 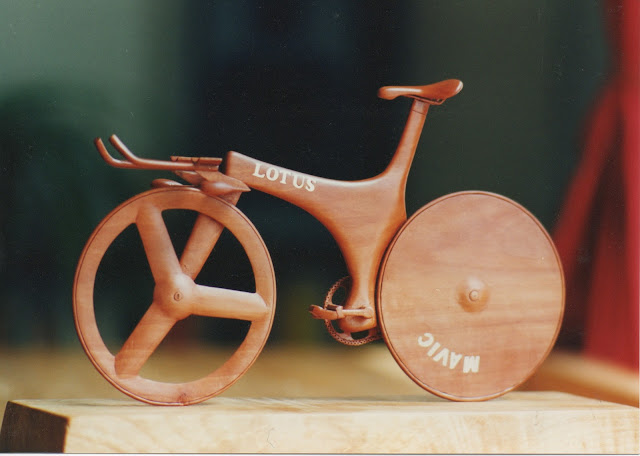 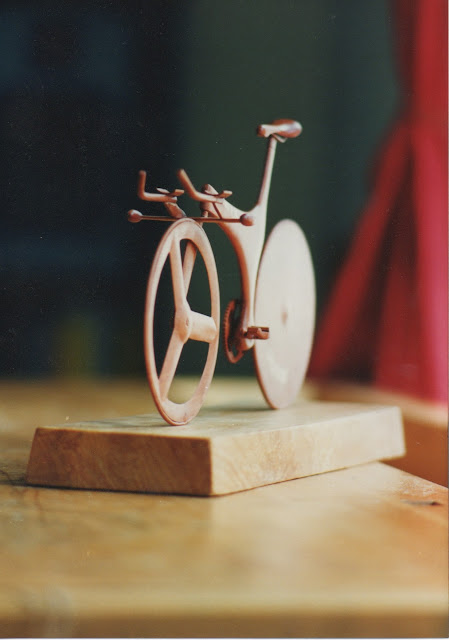 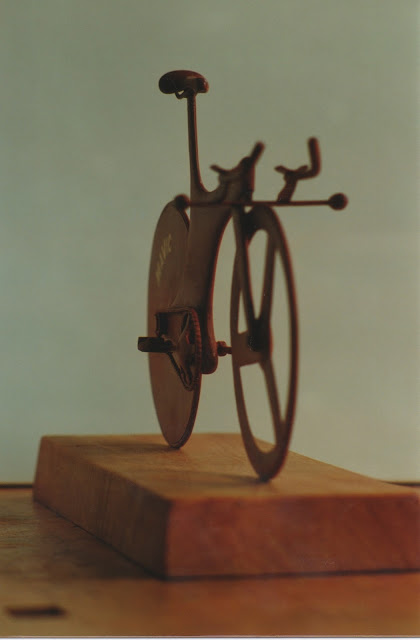 I think you can see now what I mean by delicate. 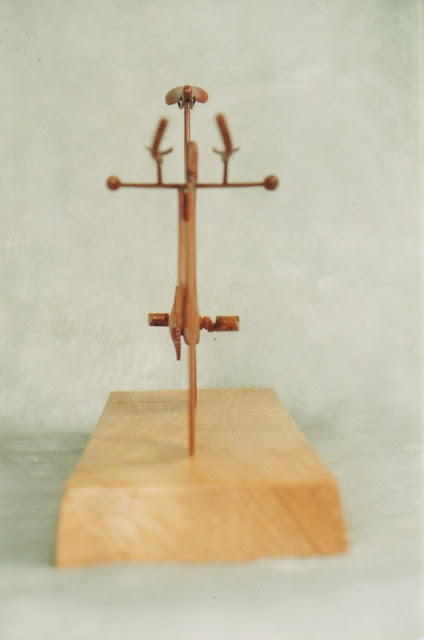 So there you have it. Ridiculously delicate, will actually break if leaned over too far but delicate pieces like this are definitely carvable if you carefully think through a safe way to proceed. If it is possible in 3 dimensions, then it should be possible to carve it.

paul
I'm a sculptor, working mainly in wood. I've been working to commission since '96. I've undertaken a variety of work in different styles and materials, relief carvings,furniture,and promotional work. A speciality is motorcycle racing, having had commissions from the Castrol Honda WSB team and the Repsol Honda MotoGP team.Riders such as John Kocinski, Aaron Slight and James Toseland among others have examples of my work.My profile picture is a drawing by my sister Felicity, whose blog can be found in my profile details.